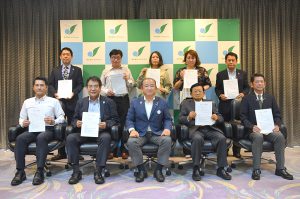 Sagamihara City held a certification ceremony for the “Trial Order Certification System,” which supports the development of sales channels for the excellent products of small and medium-sized companies in the city, at the Municipal Industrial Hall (Chuo Ward, Chuo City) on September 9. From among the products of companies that applied, 9 companies and 10 products were certified, based on the opinions of academic experts. In addition to introducing the system on a trial basis, the city will create catalogs and joint booths at exhibitions. [September 20, 2022 issue, prices and information are current at the time of publication.

At the ceremony, Mayor Kentaro Motomura presented each company with a certificate of certification. Some of the products were designed to address social issues such as disasters, aging populations, and countermeasures against infectious diseases, and some have already received a positive response from the market. The certification period will last until the end of March 2025.

Mayor Motomura said, “We have the second highest percentage of small and medium-sized enterprises in the designated cities.” He greeted the participants.

Mark Electronics (1 Hashimoto-dai, Midori-ku, Sagamihara), a manufacturer of electronic and electrical equipment and medical devices, received certification for its “Doctor Mark” remote monitoring device for intravenous drips (reference price 55,000 yen), which was developed to reduce the burden on nurses. The device uses microwave Doppler radar, which is used in automobile collision prevention systems, to detect drips. It notifies smartphones and PCs via wireless communication of flow rates, abnormalities in dripping, and the end of drips.

Net Field’s “Ogapot” (1,650 yen), a disaster/emergency toilet, uses sawdust generated when trees are thinned in Tsukui as an absorbent. The sawdust is specially processed to ensure that it absorbs water and dirt. The company has also developed “Ogapot Pro” (¥192.5/liter), which adsorbs wastewater generated at construction sites and building maintenance and can be disposed of as industrial waste.