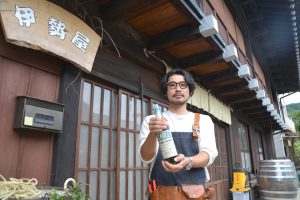 In an effort to promote sake made with locally produced medicinal herbs, Iseya Brewery (Obara, Midori-ku, Sagamihara City), located at Obara-juku on the old Koshu-kaido (National Route 20), is producing “herb-based liqueur” Obara-juku, made with locally grown medicinal herbs and local mulberry leaves. In addition to utilizing abandoned farmland for cultivation of raw materials, the company also works in collaboration with the surrounding community by purchasing farm products on consignment. President Tatsuya Motonaga, 36, says, “We would like to work more closely with the local community to revitalize the town. I want people to think that Sagami Lake is a great place.

After studying at bars in Tokyo and China, Motonaga, a native of Osaka Prefecture, visited various places in Europe to meet the brewers and observe the brewing process in order to “explain the characteristics of sake to customers. Among them, he witnessed the close relationship between agriculture and sake brewing in the south of France and Switzerland, where the local climate is utilized.

The brewery is housed in the 100-year-old Iseya, which is also the origin of the company’s name, and was restored with the help of local carpenters. The house had been vacant for more than 30 years and was the family home of Mr. Kobayashi, the master of “CAOL ILA” a bar in Shibuya, Tokyo, where Mr. Motonaga worked for 10 years. While helping with repairs and cleaning, Motonaga felt that the Obara area’s “rich natural environment and close proximity to agriculture was similar to a European sake brewing environment,” and decided to open a business there.

In addition to mugwort, which forms the base of the flavor and aroma, the herbs used include fennel, lemon balm, and sage, all of which are mixed according to the season. Mulberry leaves and other ingredients unique to the former Tsukui area are also added.

The company also rents three abandoned lots in the area for cultivation, and sometimes purchases seeds and seedlings from local farmers, as well as aromatic herbs and vegetables grown by local farmers. In Europe, mugwort has a strong bitter taste, but in Ohara it has a sweet taste. I have the impression that it grows better than in Europe,” says Motonaga.

The herbs used for pickling are either fresh or dried, depending on the characteristics of the ingredients. The herbs are soaked in domestic vodka, which serves as the base, and then packed in whiskey casks rented from a famous brewery and aged for at least three months in a warehouse. A family member who moved to Sagamihara from Osaka assists with the bottling and labeling, which is also done by hand, one bottle at a time.

The company was founded in 2020, but the first shipment did not arrive until November 2009 due to the acquisition of a sake brewing license and preparation of the brewery. Because it is handmade, the company produces about 1,000 to 1,500 bottles per month and distributes them mainly through wholesalers who can understand the taste, flavor, and brewing background of the sake. This month, they plan to ship to Germany, China, Australia, and other countries.

Mr. Motonaga smiles and says, “This is the most fun I have ever had. The first year after the first shipment will be a period of trial and error, and he is experimenting with various ingredients and aging periods. In the future, he would like to develop a herbal sake based on locally brewed sake, as well as a base sake using local ingredients.

He also focuses on the fields to create new flavors, and visits the fields twice a day, morning and evening. However, he does not use pesticides or chemical fertilizers and does not cut weeds as much as he should.

Mr. Motonaga explains, while showing his neighbors around the fields, that “the better the flavor and aroma is, the less fertilizer is applied and the more the weeds fight with the fertilizer. The fertilizer is made from herb shavings and other ingredients, but “it is not out of a sense of SDGs or ecology, but rather a natural result of our pursuit of good taste and aroma.

In Europe, herb-based liqueurs have long been drunk as water medicines by adding medicinal herbs to wine and other drinks, but in modern times they have been improved to make them easier to drink and are now popular as “shikoshibi. In Japan, there is a similar “yomeishu,” but the difference between the two is that “yomeishu is for medicinal purposes (with claims of efficacy), while yakusoshu (herbal liqueur) is for drinking for pleasure,” he explains.
Translated with www.DeepL.com/Translator