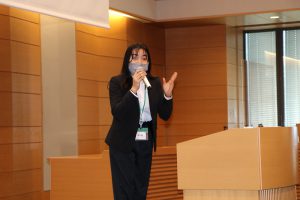 On March 30, an educational forum sponsored by the public interest incorporated association “Yamato no Kokoro,” which supports youth development, was held, and students from Kashiwagi Jitsugyo Vocational College (1 Fukami Higashi, Yamato City) delivered speeches on the stage of the International Conference Hall of the Diet in the First House of Representatives Building (Chiyoda Ward, Tokyo). Kashiwagi Jitsugyo College (1 Fukami Higashi, Yamato-shi, Japan) gave a speech. Anne Nofitayani (Indonesia), a second-year student in the Information Business Department, told the press after her speech, “I was very nervous in the magnificent venue, but I was able to show the results of my practice. It was a valuable experience that I will remember for the rest of my life.

The theme of her speech was “I walk my path. She spoke in fluent Japanese about how she enjoyed her studies at the school, how she worked hard at a part-time job to earn money for living and tuition, and how her days were busy with schoolwork and work, and how she reaffirmed the meaning of her study in Japan.

Ms. Nofitayani’s dream for the future is to “live on her own,” and she plans to establish a company dealing in Japanese sundries in her home country. At the school, she is working hard in her studies to acquire qualifications in bookkeeping and computers as part of her commercial business education. In her speech, she also shared her daily situation, saying, “I enjoy studying bookkeeping, and I study until the very last minute even after school.

After studying, he runs to the station and goes to his part-time job. At his part-time job, he had come to be called a “veteran” and no longer had any trouble with his work. He would go home and go to bed while listening to his roommate’s advice. I was spending my time thinking to myself, “Every day is busy, and my life as an exchange student is very fulfilling.

However, her homeroom teacher pointed out to her that “living in the ‘triangle’ all the time does not make you happy, and it can also make you lose your mind,” which was a turning point for Nofitayani. She had lost sight of the end (the purpose of her study abroad) in her triangular life, thinking of school if she left home, a part-time job if she left school, and home when her part-time job was over.

The teacher’s words inspired me to go to a park with a great view, and when I saw the autumn leaves beginning to change color, I noticed the change of the season. By stopping once, I remembered that “being in Japan is a chance to lead to my dream,” which I had forgotten. “My life is the same as before, home, school, and part-time job, but these are processes that lead to my dream. It is not the same as before, I have started walking my own path,” he changed his mind.

In order to promote the internationalization of youth, the plan was for both to make presentations in foreign languages, with Japanese students giving speeches in English and foreign students in Japanese. Participants were students who responded to the “Yamato no Kokoro” call for applications, and about 150 people from all over Japan, including Tohoku and Kyushu, attended the event.

The school provides guidance to international students enrolled at the school in acquiring qualifications for various certification exams, including bookkeeping, and also makes efforts to help them learn Japanese. To test the results of their efforts, the school’s representatives participate in a speech contest for foreign students sponsored by the Prefectural Association of Vocational Schools and Colleges every year.

Principal Teruhisa Kirino said, “The Japanese presenters also demonstrated excellent English skills, but I am proud that they were praised by the audience for their Japanese language skills, which were no less impressive. (Ms. Nofitayani) mentioned in her speech that privately-funded international students spend their days making ends meet for tuition and living expenses, and that their studies are insufficient to meet their goals, so at the end of the meeting, she told the audience that she wished international students would do well in Japan and to support them in many ways”.